Please join us on Wednesday, September 4th at 6:30 PM at Faith Community Church (5315 Harford Road) for a special presentation on Human Trafficking. Human Trafficking occurs in every county in Maryland and can occur in all communities and income levels. Join us to learn more about this problem, how to recognize it, and how to fight back. 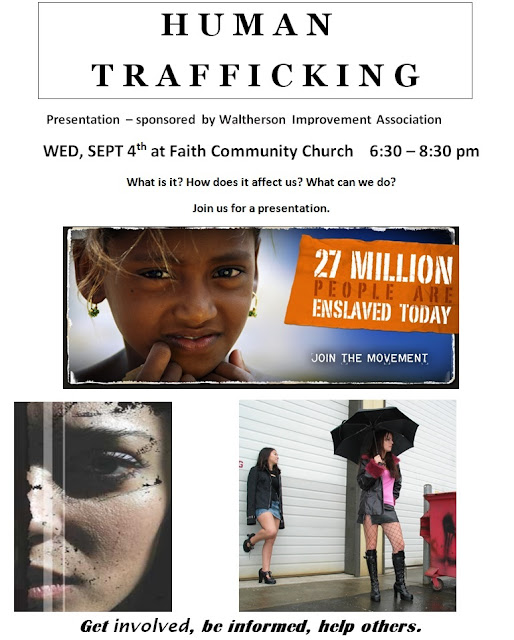 Please be careful with your electronics and personal items. You may have seen reports over the past week or two about joggers being robbed of cell phones.We have heard from a neighbor that a man was attacked in a similar fashion on Harford Road near Southern Ave yesterday morning around 7:15am by a group who stopped in a car, attacked the victim and stole his cell phone. Please be on the lookout, stay aware of your surroundings, and try to avoid using your cell phone when out on foot.
at 8/16/2013 10:11:00 AM No comments:

Under appeal number 2013-262 Zion Baptist Church is appealing to the Board of Municipal Zoning Appeals (BMZA) to construct a detached gym and classroom building for the existing middle school at 4915 Holder Ave. The BMZA will hear this appeal on Tuesday, August 20, 2013 @ 1 PM in Room 215 at City Hall. Zion Christian took notes of neighborhood concerns about this plan at our a special meeting with them last month and were going to see how those concerns could be addressed. In light of this, we wrote a letter to BMZA asking this hearing be postponed until Zion Christian is able to get back to us.
at 8/16/2013 09:40:00 AM No comments:

Below is an update from the Royal Farms Opposition regarding the proposed Royal Farms gas station at Harford Road & Glenmore Ave in Glenham-Belhar to our north.

A group of neighborhood associations and individual residents of northeast Baltimore City have filed a zoning appeal to Baltimore City Circuit Court to block a proposed Royal Farms mega gas station, which would have 12 gas pumps and remain open 24 hours a day/7 days a week. The appeal was filed in July by attorney John C. Murphy, representing the associations.
Royal Farms had requested a zoning variance to purchase a building at 5901 & 5915 Harford Road to build a new station, razing the exiting office building on the site in an established residential area. Five neighborhood associations in northeast Baltimore City—GlenHam/BelHar, Hamilton Hills, Lauraville, Westfield and Waltherson—voted at membership meetings to oppose the proposed megastation and filed an appeal to the Baltimore City Board of Municipal and Zoning Appeals (BMZA).
The original BMZA decision was made on April 2, 2013, when residents of the area packed the City Council chambers to argue against granting the zoning variation to Royal Farms. The residents, many of whom took time off from work to appear at the hearing, argued both about the strict application of the zoning code and about the general disruption and nuisance that the proposed megastation would create in the residential neighborhood. Residents stressed the location of the building, directly across the street from an Enoch Pratt library, at a dangerous 5-way intersection and challenged the proposed megastation, under the Zoning Code, for “the proximity of dwellings, churches, schools, public structures, and other places of public gathering.”
“This station is just bad all the way around,” said Julie Saylor, an irate resident of the area. “It’s right across the street from the library, it’s near public schools. We have set a goal of the Harford Road corridor to reduce auto traffic and emissions in favor of a walkable and family-friendly district—and the megastation ain’t it.”
With no discussion, the BMZA unanimously approved the zoning variance. A critical aspect of the hearing was City Councilman Robert Curran, who sent a letter to BMZA on the morning of the hearing endorsing the variance—even though all of the neighborhood associations had voted to oppose it—and who sat with the Royal Farms attorneys during the hearing and who testified at BMZA in favor of the megastation. At the August, 2012, meeting of the GlenHam/BelHar Association, Curran stated that he would support whatever the community supported. Curran declared personal bankruptcy in June 14, 2013.
This court appeal has two important provisions:
1.      Contesting the decision itself      and
2.      Challenging the procedures of the BMZA, accusing the board of violating the state’s Open Meeting law when it issued a second Resolution on June 13, 2013, without a public hearing. The new appeal also claims that BMZA had no authority to issue a second resolution on June 3 when its initial decision was being appealed. The appeal also accuses the BMZA of “Ex Parte communications” violations (or for the layperson, speaking to one attorney/party without speaking to another party on issues relating to both).
Opponents of the proposed megastation note that under the new proposed zoning code for Baltimore City, a station of this size would not be allowed. Residents of the area testified at the meetings of the City Planning Commission against such stations and a representative of the Commission attended the hearing on April 2nd to inform the BMZA of the proposed changes, which will—in the future—block such a megastation in a residential area.
The protestors also note that Royal Farms has been involved in a series of “bad neighbor” legal cases. In May 2013, Royal Farms agreed to pay a penalty of $600,000.00 for fuel leaks from underground gas tanks in Rosedale and in Cecil County that contaminated drinking water systems.
In another incident, a Baltimore County Circuit Court jury awarded the owner of the Bengie’s Drive-In $838,000 in June, 2012, agreeing with his contention that lights from a neighboring Royal Farms convenience store were a nuisance that interfered with his business.
In addition to the court appeal, residents of the surrounding neighborhoods have been picketing on Harford Road, marching down from the proposed site to the existing Royal Farms store at the corner of Harford Road and Echodale. The movement has also developed yards signs, bumper stickers and NoRoFo T-shirts and the members say that the response of people has been great. Several people turned away from the Royal Farms store after getting an explanation from the picketers about the proposed mega-station and there is a move to expand the picketing to other Royal Farms stores.
“We are not opposed to any development of Harford Road,” said Dell Hagen-Rhodes. “There are already too many vacancies but this type of megastation is not what we need. Royal Farms is opening a megastation out on Pulaski Highway and that’s where this kind of station belongs—not in a residential neighborhood. There are also a number of gas stations on Harford Road already, as well as an existing small Royal Farms store, so the proposed megastation adds zero to our area. In fact, it could close up some existing businesses and create more vacant storefronts. We don’t need that. ”

A copy of the August Newsletter is linked to below. Our August meeting will be at Harbel at 7:45 PM on Wednesday, August 7th.